Revenge will be on the minds of Perth SC this weekend when they host Bayswater City at Dorrien Gardens on Saturday afternoon.

While the Azzurri may be 10 points clear at the top of the ladder, it was Chris Coyne’s City that defeated them to clinch one of two spots for WA clubs in the FFA Cup.

So expect Perth to have retribution on their minds against Bayswater, who are currently in third spot, in what is the match of the round.

Elsewhere, second-place Floreat Athena will be hoping for a slip-up by Perth ahead of their clash with Balcatta FC.

Inglewood United do battle with Armadale, while there should be plenty of goals as Sorrento host Perth Glory.

Things are heating up in Queensland with just four points separating the top three clubs.

Second-place Lions FC have done a great job to close the gap on leaders Peninsula Power to just one point but face a tough home clash against the dangerous Gold Coast Knights.

The Power’s results have dropped in recent weeks but they should have little trouble at home against lowly Western Pride.

In other matches, FFA Cup side Olympic FC travel to Moreton Bay, while it’s Brisbane City up against Brisbane Strikers.

Are the wheels falling off Avondale’s Premiership charge?

The Avengers have lost their last two games to see their lead at the top cut to four points – with second-place Heidelberg having a game in hand – heading into Round 21.

And it’s another difficult task for Avondale on Saturday, as they host a Hume City side in excellent form as well as booking their spot in the Dockerty Cup final in midweek.

Lakeside Stadium is the place to be on Sunday as it’s a clash between powerhouse clubs South Melbourne and Melbourne Knights, who also made it through to the Cup final.

Elsewhere, Heidelberg United are at Kingston City on Monday night, while the round begins on Friday with Bentleigh Greens at home against Altona Magic.

Campbelltown City is the team to catch in South Australia, with the defending champions holding a seven-point lead at the top heading into Round 17.

MetroStars – currently fifth – are their next opponents in an intriguing battle at TK Shutter Reserve on Saturday.

Adelaide Blues Eagles open the round on Friday night with a visit to South Adelaide, while the Adelaide Comets take on Raiders.

It will be a momentous day at Adamstown Oval on Saturday as the Rosebuds host league-leaders Edgeworth Eagles.

The Rosebuds are celebrating their 130th year – almost to the day – and are marking it in a clash between the regions two most successful clubs.

Second-place Broadmeadow Magic have the bye this weekend.

It’s the Hobart derby in Tassie this weekend with South Hobart up against Hobart Zebras in a battle between third and fourth.

Second-place Olympia Warriors play on Friday night against Glenorchy Knights, knowing a win would see them go to the top of the ladder, temporarily at least.

That’s because current leaders Devonport Strikers are in action on Saturday afternoon, heading to Buckby Land Rover Park for a tough assignment against Launceston City. 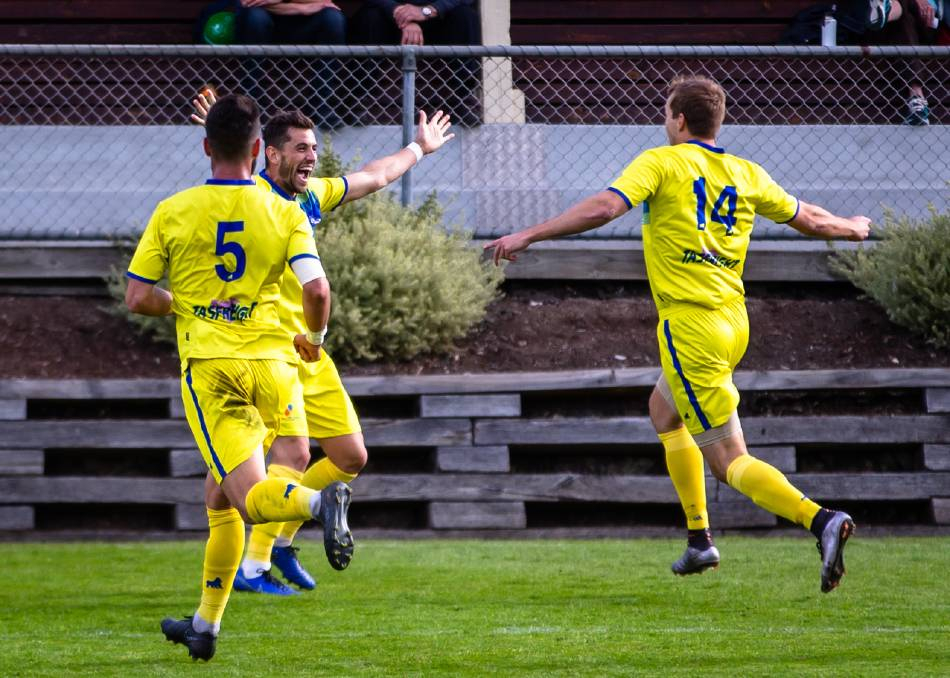 Leaders Tigers FC can edge closer to the premiership in the ACT when they host second-from-bottom Woden-Weston on Sunday.

The side from Cooma have a five-point buffer at the top to Canberra Olympic, although the latter have a game in hand.

Olympic are also in action on Sunday, welcoming Tuggeranong United to O’Connor Enclosed.

The NPL takes a week off due to the final of the TAFE NSW Waratah Cup between Marconi Stallions and Sydney United 58.