Warren Moon: The road from community coaching to the A-League

The first is to give young Queensland players an opportunity to perform at the highest level. The second is to prove that National Premier Leagues coaches can mix it with the best.

Moon’s “Queensland-first approach”, which in 2021 has unearthed the likes of Alex Parsons and Cyrus Dehmie, is guided by his own history in the game.

From coaching kids in community football to leading Brisbane Roar to the A-League Finals Series, his career is an inspiration for up-and-coming coaches across Australia.

Moon, 39, is self-aware enough to admit that his own professional playing career – for Brisbane Strikers, Brisbane Roar and Scottish club Queen of the South – was modest.

A recurring groin injury forced Moon’s return from Scotland to Brisbane in 2007, where he began coaching the Centenary Stormers Under 11s while setting up a junior development program at the club.

“What I loved about coaching at Centenary Stormers was that it really improved my communication skills,” recalled Moon.

“Obviously, it is very easy to speak to adults, but when you are talking to children, you have to use the right words and be clear and concise in your approach. 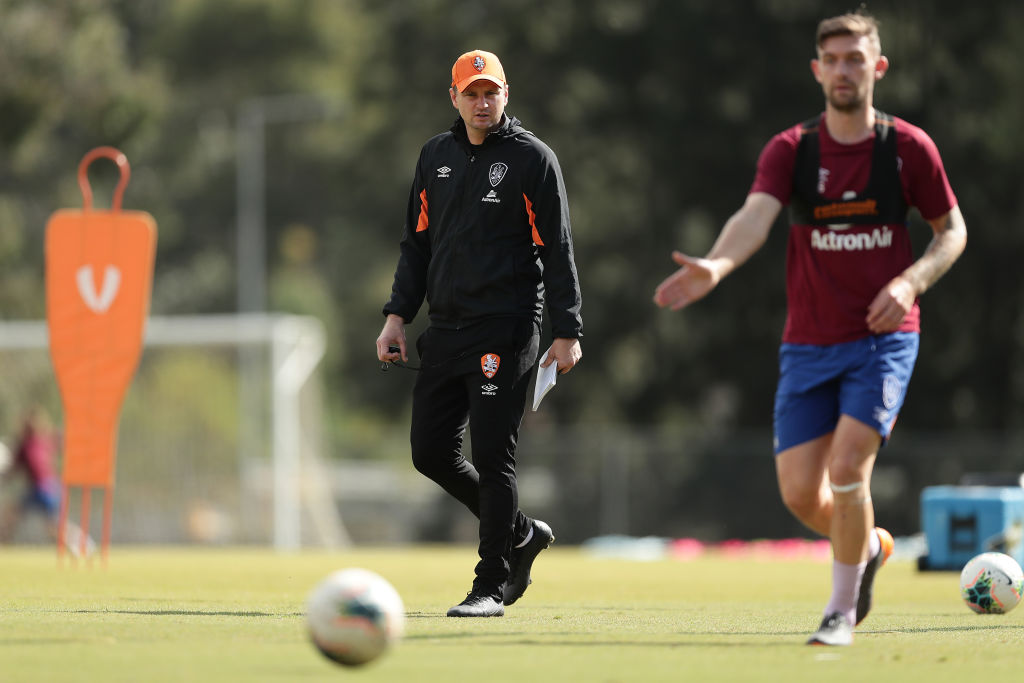 “I actually felt that was a great learning experience for me as a coach where I could simplify my words and be clear with what I want to get across. It helped my senior coaching, as well.”

In 2008, Moon took over as player-coach of Eastern Suburbs in Brisbane’s Premier Division 1, leading the club to the Championship in his first season.

“I was 25 and I’d just come back from overseas,” said Moon. “I realised that the injuries I’d had meant that I was never going to get back to professional football as a player. The Eastern Suburbs job was my first big role, because at that stage I’d had no experience except for my playing background.”

Working as a player-coach first at Easts and then at Peninsula Power taught Moon a valuable lesson that actions speak louder than words.

“When you start asking players to perform actions on the field, you also as a player-coach have to be accountable for that and do it yourself. If you don’t, you lose credibility with the playing group,” he said.

Like many coaches working in a semi-professional environment, there were times when Moon needed to piece together two or three jobs in order to make a living.

In those early days of his managerial career, he also worked as Director of Coaching for the Anglican Church Grammar School, also known as “Churchie”. It was, he says, a crash course in adaptability.

After winning several titles in the Brisbane Premier League with Peninsula Power, in 2014 Moon took over Lions FC, a fallen powerhouse of Queensland club football.

Under Moon, Lions won back-to-back BPL championships in 2016 and 2017, before winning the NPL Queensland double in 2018.

In 2019, Lions defended their Premiership while Moon guided Churchie’s First XI to the school’s first ever GPS Premiership.

Soon after, he was appointed as Brisbane Roar Academy General Manager, before being promoted to the head coach role five months out from the A-League season 2020-21.

Moon is adamant that the decade he spent progressing along the coaching pathway – from community football to the Brisbane Premier League to school football and the NPL – has prepared him for the A-League and beyond.

“There was a perception that someone like me, with less profile, was never going to get a job in the A-League,” said Moon, who is currently undertaking his Football Australia/AFC Professional Diploma.

“What we do here in Queensland with our development pathways for players and coaches, I think we’re ahead of the game in terms of other states.

“Without being disrespectful to a lot of states, where money might be a bigger factor, Queensland has a great focus on coaching development rather than building and buying teams.

“I knew that if I did a half-decent job at Brisbane Roar, it would show the next NPL coach – whether it be from Queensland or somewhere else – that they could step up and do it too.

“Whatever I do now, moving forward I think this season I’ve proved that NPL coaches can make it in the A-League.”

To start your coaching journey and to find out more about Queensland’s coach pathway, click here. Northern NSW After the opening week of the season was postponed as a result of wild weather, NPL Northern NSW action got underway with Round 2 being played over the weekend. Jared Muller's stunning stoppage time free-kick secured all three points for Newcastle Olympic in a