Thunder the toast of Toowoomba

PS4 NPL Queensland outfit SWQ Thunder snapped a two-year, 46-game win-less streak on the weekend, prompting their local newspaper to splash the historic victory on the back page.

Cheered on by a home crowd of over 1000 in their season opener on Saturday night, Thunder survived a late scare to win 2-1 over Ian Ferguson's Northern Fury.

The win put paid to an ignominious winless run for the Thunder and now sees the club, which was only formed in 2012, the toast of Toowoomba – pushing rival codes off the back page of local daily The Chronicle.

Thunder coach Chris McLeod said he delivered no motivational speeches prior to the club’s breakthrough win.

“If they get to this stage and they still need motivation from me to win then they really shouldn’t be lacing up the boots for a competition that sits at that level below the A-League,” he said.

Derided for the past two years as the whipping boys of the national second tier in the Sunshine State, Thunder boast plenty of unwanted league records including conceding a staggering 209 goals over the past two seasons.

Most heartbreaking of all is that Thunder saw a previous win over CQFC Energy wiped from the official record in 2014 after their opponents were booted from the competition mid-season for breaching their participation licence.

Ben Drewe, Sports Editor for The Chronicle, said he was looking forward to plenty more headline grabbing performances for Thunder in 2016.

“What you want with your sporting teams is being able to get behind them and go down and support them as they compete.

“Results sort of dictate what match reports are about so it’s certainly great that for Monday’s paper we were able to post a story about a Thunder win for once which is great news.” 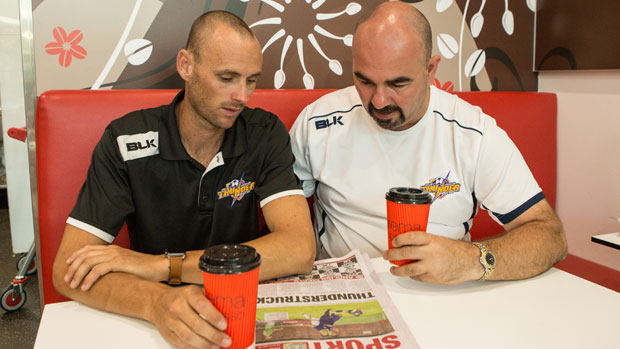 An example of the dedication shown by the squad is midfielder Jackson Haussler, who travels the 600km round journey from Inverell in rural New South Wales three times a week to train and play with the club.

One local product that has experienced the highs and lows is burly defender Rowan Saloman, who joined the club at the start of last season.

“Us winning is good for the community and it shows that we can be competitive with all the teams in Queensland and that’s the way football is going to move forward in Toowoomba,” he explained.

“It was also really great for the boys who have stuck with the club through the hard times.”

Thunder will look to back up their effort against another team guided by a former Hyundai A-League coach this weekend when John Kosmina brings his Brisbane City team to Toowoomba.

Missing your weekend football fix? Show the world your skills with our #PlayAtHomeChallenge

Matches around Australia may have been postponed but you can keep football in your life with the #PlayAtHomeC...nge. While it is important to practise social distancing during this time of uncertainty, it has never been more important to be active, connect with each other an