South Melbourne captain Michael Eagar says automatic qualification to the 2016 Westfield FFA Cup Round of 32 is the carrot driving the club's quest to win their fourth trophy of the season and become PS4 NPL National Champions.

It begins for South on Saturday in Game 3 Elimination Final of the PlayStation 4 National Premier Leagues Finals Series.

South take on Olympia FC at Lakeside. The challenge for South is two-fold.

Bouncing back from last weekend's PS4 NPL Victoria Grand Final loss to Bentleigh. Then, getting past the dominant side this year in the Apple Isle.

It won’t be easy. And for the loser, after a long season it'll be all over.

Grand final aside, South have won the FFV Community Shield, the Dockerty Cup and the PS4 NPL Victoria Premier’s Plate. However, there was Westfield FFA Cup heartbreak on the Gold Coast. 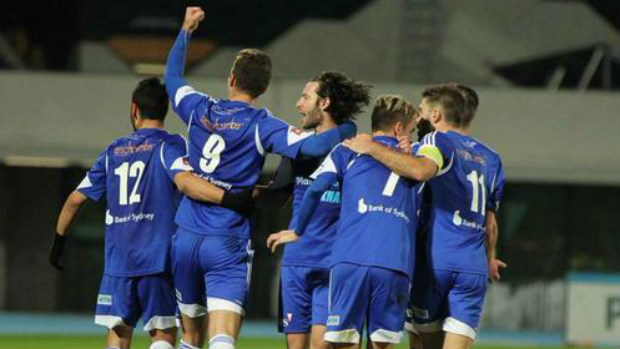 So after a roller-coaster season for South, the prospect of an automatic spot in next season’s Westfield FFA Cup Round of 32 is the carrot for them and all teams in the PlayStation 4 National Premier Leagues Finals Series. Not to mention the kudos of being named national NPL champions.

It's a huge few weeks for these semi-pro PS4 NPL clubs who are at the business end of a long season.

With three sessions planned this week, the 26-year-old New Zealander believes his South teammates have already bounced back from their Grand Final loss.

“There’s something special in this group. We’ve had a few blips during the season but every time they’ve responded well,” Eagar told www.nationalpremierleagues.com.au.

“They’ve [the squad] shown a lot of character throughout the season and for that reason I’m confident they’ll respond this Saturday.

“It’s been a long season but looking at that positively, it shows we’ve contested all the major competitions and no other team in Victoria have done that," he said.

Last weekend, Milos Lujic scored his 30th goal across all competitions, before Wayne Wallace and Chris Lucas gave Bentleigh the win in extra time in front of over 3000 fans.

“Look, any grand final you lose is tough to take. Unfortunately a red card and two late goals in extra time ... it wasn’t to be," said Eagar.

Eagar was front and centre of South’s FFA Cup challenge this season, though his penalty miss against Palm Beach Sharks on the Gold Coast proved crucial.

But joy on the national NPL stage gives the winner a chance to automatically qualify for the 2016 FFA Cup Round of 32.

“It gives you the security of a spot. Anything can happen in qualifying for the FFA Cup, and we know how tough that can be.

“It would be a weight off our shoulders if we were to win the national NPL title and get that bonus of an automatic spot into the FFA Cup.

“There’s still plenty of ambition and we know our season is not finished and the biggest achievement would be to win the NPL nationals," added the former Mirimar Rangers player.