Round 10 of the PlayStation®4 NPL NSW Men’s Competition is in the books and it was another scintillating week of action around the grounds.

Sydney United 58 has continued their incredible winning streak, while Sutherland Sharks new coach Grant Lee has notched his first win at the club.

Rockdale City Suns faced another hiccup as Wollongong got their season back on track and Hakoah collected a vital point.

However, APIA Leichhardt Tigers win against Blacktown City was the biggest news of the round as Danial Cummins side ended the nine-game unbeaten streak of their opponents.

A Tasuku Sekiya strike on the cusp of halftime has given APIA Leichhardt Tigers a hard fought 1-0 win during their PlayStation®4 National Premier Leagues NSW Men’s clash with Blacktown City at Lambert Park on Sunday.

The result was Blacktown’s first loss of the season with APIA bouncing back from a 4-2 loss last round to secure the morale boosting win.

It was a notable APIA debut for former Hyundai A-League journeyman Ivan Necevski who made a number of key saves for his new side.

Blacktown remains in top spot despite the loss, but holds only a two-point lead from second placed Sydney United 58 and third placed APIA. 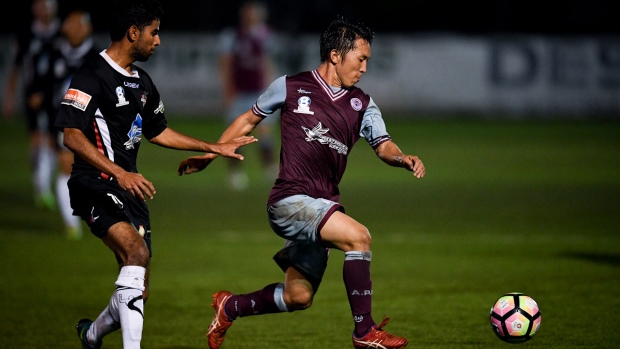 A double to Tomohiro Kajiyama and a sublime header from Jeremy Cox was enough for the Sharks.

While a late consolation goal from Parramatta’s Gio Cerasoli ruined the home side’s clean sheet, the result was enough to secure a second win in three games for Sutherland.

Jalloh's 88th minute strike was the final twist in a see-sawing game which featured Bonnyrigg fighting back after trailing Sydney FC on three separate occasions.

The young Sky Blues would've felt they'd done enough when Charles Lokolingoy put his side ahead in the 82nd minute to make it 3-2 after earlier goals from Will Mutch and Bai Antoniou.

However it wasn't to be as the White Eagles rallied through goals from Martin Lo and Jalloh's incredible second half double.

It is the third straight game without defeat for Hakoah who move up to seventh position on the ladder only three points outside the top five.

Olympic cling onto fifth place on 18 points but will need much improved results in coming weeks to secure their spot in the finals.

The former Japan international striker wasn’t going to let the Wolves fall to their third consecutive loss and delivered a starring role in the win as his side picked up a much needed three competition points,

For the second straight week Rockdale were well below their best as they suffered only their second loss of the season.

Goals from Panny Nikas and Matt Sim on either side of half time has helped Sydney United 58 edge Manly United 2-1 in a tight PlayStation®4 National Premier Leagues NSW Men’s contest at Sydney United Sports Centre.

Leigh Egger netted a consolation deep into injury time after heading home Sam Wilson’s corner as United 58 conceded for the first time in 450 minutes of football.

However, Egger’s goal wasn’t enough to halt a seventh straight win in all competitions for Mark Rudan’s men.