Sydney United 58 FC and the Edgeworth Eagles will fight for the title of National NPL Champion when they line up in the Grand Final of the PlayStation 4 NPL 2016 Finals Series at Edensor Park on Sunday.

A spot in next year’s Westfield FFA Cup Round of 32 and the title of PlayStation 4 NPL 2016 Champions of Australia is the reward for the winners of the all-New South Wales decider as the three week knockout tournament featuring the top of the table clubs from the country’s eight PlayStation 4 NPL competitions reaches its climax.

The PlayStation 4 NPL 2016 Grand Final will be streamed LIVE

Sydney United 58 FC will be attempting to win their second PlayStation 4 NPL title after they won the inaugural competition in 2013, while it is a new frontier for the Edgeworth Eagles who are the first club from Northern NSW Football to feature in the decider.

The match promises to be a high calibre contest with Mark Rudan’s Sydney United 58 FC comprising a number of players with Hyundai A-League experience, headlined by Panny Nikas.

The attacking midfielder has undoubtedly been the player of the tournament having scored five of Sydney United 58 FC’s seven goals to date, including a number of stunning strikes. 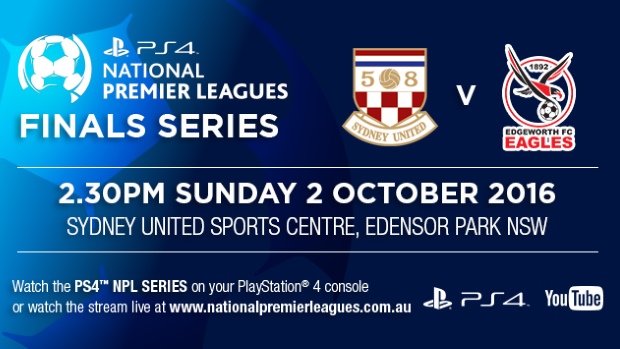 Both clubs have come through tense, tightly contested matches to progress to the Grand Final. Sydney United 58 FC were given a huge fright by Adelaide City before prevailing 5-4 thanks to a Nikas hat-trick, followed by a narrow 2-1 victory over Brisbane Strikers in the Semi Finals.

Edgeworth Eagles caused an extra time upset against 2014 Westfield FFA Cup semi finalists Bentleigh Greens in the Elimination Finals before a solitary McBreen strike saw them get past Perth SC in the west.

While both sides came through hard fought matches, they have taken contrasting paths to the Grand Final in terms of distance travelled. Sydney United 58 FC find themselves at home for the third straight time having hosted both their Elimination and Semi Finals.

On the other hand, Edgeworth Eagles have had to travel to Melbourne and Perth on their way to the Grand Final, and will make the road trip from Newcastle to Sydney tomorrow (Saturday) to finalise preparations for Sunday’s match.

Edgeworth Eagles will be aiming to replicate the feat of MetroStars in 2014 when the South Australian club won three straight matches away from home on their way to winning the title. Interestingly, MetroStars’ run to the 2014 title consisted of beating the entrants from Western Australia, Victoria and then New South Wales, the same States Edgeworth have been faced with this year.

The player to be adjudged best on field in the Grand Final will be awarded the John Kosmina Medal.

The PlayStation 4 NPL 2016 Grand Final will be streamed LIVE

Ticketing information: Adults $15, Concession $10, Kids under 16 FREE. Tickets will be available at the venue

Click here to go to the official match centre

Olympic Football Club have announced the addition of Japanese attacker Tasuku Sekiya  for the remainder of the 2020 NPL Queensland season. Sekiya arrives at Goodwin Park with a reputation as one of the NPL's brightest stars, having won Player of the Year honours in New South W