After the opening week of the season was postponed as a result of wild weather, NPL Northern NSW action got underway with Round 2 being played over the weekend.

Jared Muller’s stunning stoppage time free-kick secured all three points for Newcastle Olympic in a 2-1 win on the road over Broadmeadow Magic in the Match of the Round.

Edgeworth also left it late to snatch all three points in their season opener with Jeremy Brockie’s 86th minute goal proving decisive in a 1-0 win over Adamstown Rosebud to secure a winning start for new Head Coach, Peter McGuiness.

10-man Cooks Hill United put in a resolute performance in their first ever NPL match playing out a 0-0 draw with Maitland after Tommy Smart was sent off in the 36th minute.

Lake Macquarie City and Charlestown Azzurri traded goals through Callum Bower and Dylan Burston in the final ten minutes as they drew 1-1 at Macquarie Field on Sunday.

Weston Workers and Lambton Jaffas will have to wait another week to get their campaign underway after the continued wet weather forced their fixture to be postponed.

Blacktown City, Sydney United and Sydney FC lead the pack at the conclusion of Round Two in New South Wales.

Blacktown City snatched all three points with an incredible late fightback scoring in the 87th, 88th and 94th minutes through Charles Mendy and Jordan Smylie to defeat Mt Druitt 4-2  after trailing 2-1 at Blacktown City Sports Centre.

Zac Sapsford’s second goal in as many week’s proved decisive as Sydney FC defeated Marconi 1-0 at the Rockdale Ilinden Sports Centre to make it two wins from two for the Sky Blues.

APIA Leichhardt look to have unearthed a gem in 17-year-old forward Nathaneal Blair who scored the only goal of the game on debut in their 1-0 win over Manly United on Friday night.

Roy O’Donovan opened his goal scoring account for Sydney Olympic who were denied all three points by Lachlan Griffiths volley for Rockdale in second half stoppage time as the sides played out a 1-1 draw at Belmore Sports Ground on Sunday afternoon.

Wollongong bounced back from an opening day defeat with an emphatic 4-0 win over Northbridge thanks to goals from Lachlan Scott, Josh Macdonald and Peter Simonoski.

Pat Langlois made it four goals from as many outings while Harrison Sawyers also found the back of the net in a 4-1 win over St Albans in Sunday's top of the table clash at Churchill Reserve.

In Sunday’s other match Heidelberg picked up their first points of the season defeating Oakleigh 2-0 thanks to goals from Kaine Sheppard and Chudiar Tharjiath.

Avondale and Green Gully moved into second position on the ladder where they sit level with nine points each after picking up victories over Hume and Dandenong City.

Port Melbourne sit a point behind the pair in fourth position and remain the competitions only undefeated side alongside South Melbourne after running out 3-0 winners over Eastern Lions courtesy of a Chris Duggan brace added to by a strike from George Mells.

Melbourne Knights pulled off a stunning comeback at Somers Street on Friday night, overturning a 2-0 deficit to defeat Bentleigh Greens 3-2 with Gian Albano’s second half double securing all three points.

In the weekend’s only other match Altona grabbed their first win of the season with goals from Robert Hardin and Tommy Semmy earning Magic at 2-0 win on the road against Dandenong Thunder.

MetroStars have moved level with South Adelaide at the top of the RAA NPLSA standings following the weekend’s Round 3 action.

Jackson Walls and Hamish Gow found the back of the net for MetroStars as they beat Cumberland 2-0 on the road to go level at the top of the table with South Adelaide after the Panthers suffered a 3-2 defeat at the hands of Sturt Lions.

City and Comets traded first half goals through Kur Kur and Augustus Williams as they played out a 1-1 draw in the Grand Final rematch at Adelaide City Park on Saturday evening.

Campbelltown and Beograd both grabbed their first wins of the season, defeating Adelaide United and Croydon Kings while Olympic and Birkalla played out a 2-2 draw in the final match of the weekend. 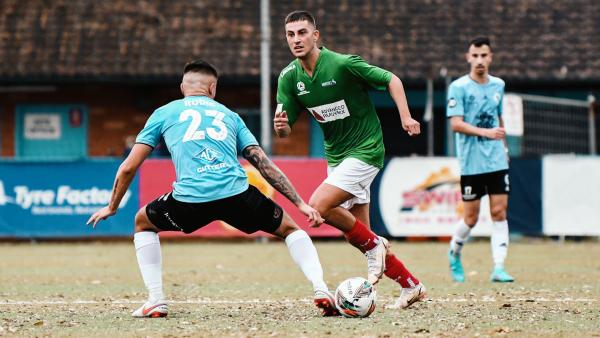 Round 2 of the National Premier Leagues NSW Men's competition rolls into town and we're hoping that it will add a ray of sunshine in what's been abysmal wet and rainy conditions in Sydney this past week.  With six matches set for take off kicking off on Friday evening, this ro