Lambton extended their lead at the top of the table with a 2-1 win over Newcastle Olympic on Saturday.

The Jaffas made the trip to Darling Street thinking a win would be necessary with second-placed Broadmeadow kicking off at the same time close by at Adamstown Oval against struggling Adamstown Rosebud.

Lambton fell behind just before the half hour mark when Tom Curran was first to react to a loose ball just outside the Jaffas penalty area before blasting it first time past veteran Lambton goalkeeper Ben Kennedy.

The visitors were level 10 minutes later when Olympic failed to deal with a Scott Pettit free kick, with the ball eventually bundled over the line.

Lambton then took the lead before half-time when Ben Hay made the most of a failed Olympic clearance to race clear down the left before cutting the ball back for Pettit to tap home.

Jaffas have now won their last three matches in a row and are unbeaten in their last eight to sit three points clear of Maitland at the top of the table.

Olympic remain fifth despite the defeat but now face a battle with Charlestown Azzurri for the last finals place.

Joel Griffiths’ side face Azzurri twice in the next two weeks. Charlestown host the rescheduled round seven match on Sunday as part of the spare weekend before Olympic welcome Azzurri to Darling Street in round 16 the following Sunday.

Lambton face Edgeworth in their rescheduled round 11 clash at Jack McLaughlan Oval on Saturday before hosting Broadmeadow in round 16.

Broadmeadow lost ground to leaders Lambton after they were held to a 1-1 draw by Adamstown Rosebud on Saturday.

Magic took the lead after 20 minutes at Adamstown Oval when James Virgili’s shot was parried into the path of Jacob Dowse to tap home.

But the hosts drew level two minutes into added time at the end of the first half when Nathan Toby volleyed home a Kaleb Cox free kick.

Damian Zane’s side pushed for a winner that would not come as Magic missed the chance to maintain the pressure on Lambton.

The draw saw Broadmeadow slip to third, four points behind Jaffas, though Magic retain a game in hand.

It was another battling point for Adamstown who remain ninth.

Rosebud play their rescheduled round 13 match against Valentine next Wednesday night before facing Maitland in round 16.

Magic then face Lambton in their round 16 clash the following Sunday.

Edgeworth all but secured their finals place with a 3-0 victory over Weston on Saturday night.

Veteran striker Jeremy Brockie scored twice for the reigning premiers and champions, opening the scoring at Rockwell Automation Park with a powerful volley from Will Bower’s cross after 15 minutes.

Brockie then tapped home a cut back 10 minutes before half-time to double Edgeworth’s advantage.

The visitors secured the three points with a well-worked team goal with two minutes to play, with Jordan Bower adding the final touch.

It was a dismal night for the Bears who saw their own finals hopes take a massive hit. It was made worse by Nathan Lozada’s send off in the dying stages for stomping on Edgeworth’s Pat Wheeler.

The defeat saw Weston slip to seventh but remain four points outside the top five. They also maintain a match in hand over Newcastle Olympic and Charlestown Azzurri.

Maitland came from behind to climb to second on the table with a 3-1 victory over Valentine on Sunday.

The Magpies trailed after 17 minutes at Cahill Oval when Amanuel Ayelew scored a penalty after Valentine player-coach Adam Hughes was adjudged to have been fouled in the penalty area.

Maitland levelled just past the half hour mark when James Thompson’s high, floated corner ended up in the back of the net following a contest.

The visitors then took the lead two minutes before half-time. Valentine failed to deal with another Thompson corner, with Magpies captain Carl Thornton finding Ty Cousins to volley home.

Maitland take on Weston in their rescheduled round 14 clash on Saturday before facing Adamstown in round 16.

Riley Smith scored a hat-trick at Lisle Carr Oval to see Charlestown climb to sixth, four points behind Newcastle Olympic who Azzurri play twice in the next two weeks. Charlestown host the rescheduled round seven match between the pair on Sunday as part of the spare weekend before Olympic welcome Azzurri to Darling Street in round 16 the following Sunday.

Azzurri took the lead inside two minutes on Sunday when Smith finished from an acute angle.

Veteran Lakes striker John Majurovski equalised just before the half hour mark as he turned home a deflected shot.

The hosts regained the lead just past the hour mark when Smith tapped home after a saved shot was parried into his path.

Smith completed his hat-trick and sealed the result 15 minutes from full-time when he finished a Regan Lundy cross.

Smith’s day got even better four minutes later when he turned provider for Dom Bizzarri to volley home.

Lakes remain eighth on 11 points having lost their last five matches in a row.

Josh Rufo’s side take on Edgeworth in their rescheduled round 12 match next Wednesday night before meeting Weston in round 16.

The NPLWA ? Women's action resumes this weekend as Curtin University look to build on their first win of the season. It has been a tough campaign for Curtin who likely entered 2021 full of optimism after three wins in their final four matches last season. 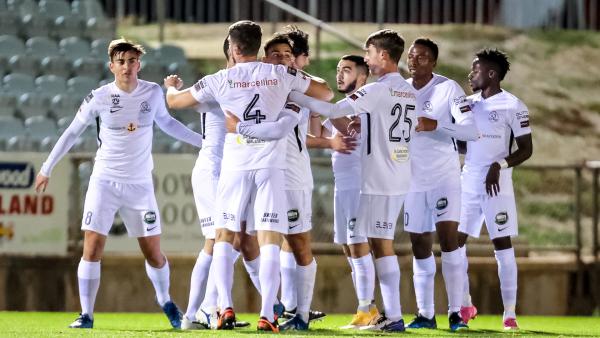 A late equaliser saw ten-man Adelaide Olympic come from behind to snatch a 2-2 draw in their match against South Adelaide on a blustery afternoon of NPL action.