South Australia's MetroStars SC are the PlayStation 4 National Premier Leagues 2014 Champions thanks to a narrow 1-0 victory over Bonnyrigg White Eagles on Saturday afternoon at Lambert Park.

The victory not only gives the South Australian based club the title in 2014 but also a guaranteed place in next year’s Westfield FFA Cup.

In the 4th minute the opening and only goal of the game arrived when a cross from the left with pinpoint accuracy was met by Fabian Barbiero unmarked in the box and, with a great strike on his left foot, the former Adelaide United midfielder found the back of the net.

It was all that was needed in the end to separate both teams even though the Brian Brown-coached Bonnyrigg White Eagles threw everything, including the proverbial kitchen sink, at the visitors late in the game as they chased the equaliser.

In the 21st minute a corner by Steven Grelli was almost directly into the net but for the good work of James Chronopoulos between the posts for the NSW based outfit who punched it away for another corner.

In the 25th minute a disallowed goal to Nikola Zonjic was ruled offside and it could have been the equaliser that Bonnyrigg were chasing.

MetroStars SC responded shortly afterwards through a diagonal shot by Perry Mitris that was just wide of the mark as they went looking for a second goal.

In the 40th minute a Tynan Diaz cross was well met by goalkeeper Daniel Godley and right at the end of the first half, Bo Hyun Chun shot wide of the goal by a very narrow margin as Bonnyrigg White Eagles tried to even the ledger just prior to the interval.

In the second half, a low trajectory shot by Steven Grelli in the second minute was saved by Chronopoulos as the opening salvo of the second stanza of play went begging. A corner by Diaz in the 50th minute was met by Dylan Fox diving in the box but in the end the ball finished just over the crossbar as Bonnyrigg went in search of the equaliser.

In the 55th minute Diaz made an electrifying run down the right flank and his cross at the end of the run was well met by goalkeeper Godley. It was not to be for Diaz once again.

In the 66th minute Anthony Solagna took the ball through the heart of the Bonnyrigg defence but fired just over the crossbar with his final kick. In the 72nd minute Perry Mitris could have double the Metrostars lead but missed the opportunity.

Late in the game Bonnyrigg White Eagles went in desperate search of the elusive equaliser and came ever so close when an Alex Mansueto cross was volleyed by Diaz at close range, but the fortuitous positioning of a MetroStars SC defender who blocked the ball with his stomach pretty much closed out the game there and then for the South Australian based side. 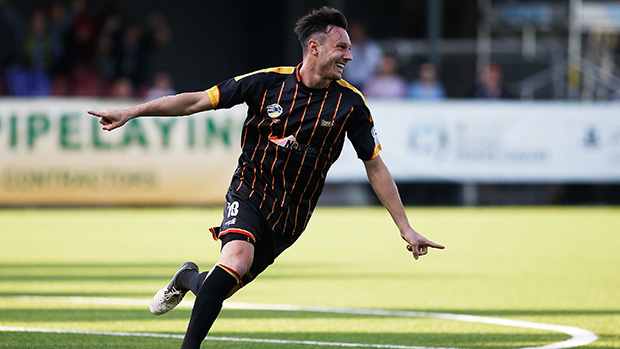