The biggest game of the year in the PlayStation® 4 NPL Northern NSW season took place yesterday in front of over 3,000 vocal fans at Magic Park.

Both Edgeworth Eagles and Hamilton Olympic deserved to take their place in the match after dominant seasons in the league.

Edgeworth finished the season as Premiers on 40 points after 13 wins, and Hamilton were third after ten wins.

Both sides entered the game without a key player. Hamilton was missing Matthew Swan who has moved to Western Australia for work, and Edgeworth were without Aaron Pritchard who was sent off in the Semi-Final against Broadmeadow.

Hamilton could have been without one of their biggest stars early on as Danny Ireland took a huge knock in a collision with Brody Taylor on the half hour mark. Bren Hammel fired in a dangerous cross to the near stick from the right and both Taylor and Ireland came sliding in for the ball. Ireland stayed down but got back up shortly after and continued.

The sides went into the half time break locked at 0-0, however the match was highly entertaining. Both sides were physical in the first half, and were moving the ball around nicely. Chances were few, however the second half would bring more about as the sides tired and play opened up.

The first goal of the game came in the 55 th minute from the penalty spot. Bren Hammel played a pinpoint long ball to Brody Taylor on the right who charged into the box. He was stood up by Andrew Swan so laid a pass back to Ayden Brice who was fouled by Kyle Hodges. Hammel stepped up to the spot and buried his shot into the bottom left hand corner. 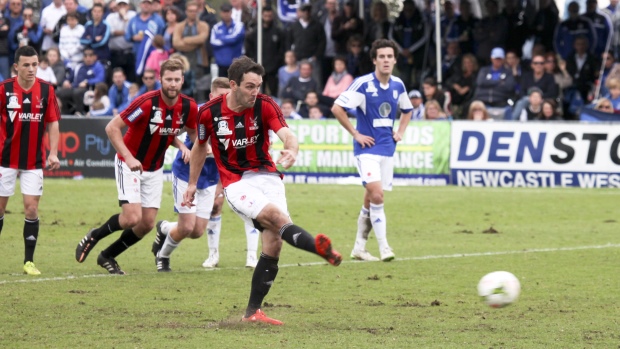 Eagles coach Damian Zane made his third and final substitution in the 66 th minute with the introduction of Aaron Mcloughlin. His intent to go after the win rather than sitting back and defend could not be clearer.

In the 85 th minute time was running out for Hamilton and they knew it. Cody Lucas whipped in a brilliant cross from the left which was met by Simon Mooney, however his header flew over the cross bar.

Three and a half minutes later the Eagles put the game to bed as Brody Taylor finished off an amazing season for both him and his club with a second for the side. Brenton Olzomer had a shot from inside the box saved by Danny Ireland, however it bounced back to him and he squared it across the box to Taylor who blasted it in off the post to make it 2-0.

With just a minute left Edgeworth skipper Luke Walker was sent off for a second bookable offence, however that could not spoil the party as Edgeworth finished as 2-0 winners and Walker picked up the Dave Williams Medal for player of the Grand Final.

The win capped off a successful season for the Edgeworth club who this year won the Premiership, had all three sides feature in the Semi Finals then the Grand Finals, took Melbourne City right to the final whistle in a 2-1 Westfield FFA Cup loss and finished as club champions.

Congratulations to both Edgeworth and Hamilton on great season, and for producing a highly entertaining 2015 Northern NSW PS4 NPL Grand Final match.

The NPLWA ? Women's action resumes this weekend as Curtin University look to build on their first win of the season. It has been a tough campaign for Curtin who likely entered 2021 full of optimism after three wins in their final four matches last season.

NEWCASTLE OLYMPIC 1-2 LAMBTON JAFFAS Lambton extended their lead at the top of the table with a 2-1 win over Newcastle Olympic on Saturday. The Jaffas made the trip to Darling Street thinking a win would be necessary with second-placed Broadmeadow kicking off at the same ti