The PlayStation 4 NPL Elimination Final between West Adelaide SC and Bayswater City SC on Saturday looms as a mouth watering affair. Find out why here.

West Adelaide SC saw off a host of challengers to finish top by one point and capped off a memorable campaign by defeating Adelaide Blue Eagles in last Saturday’s Grand Final to be crowned South Australian Champions.

The former NSL club finds itself back on the national stage for the first time since 1999 and will host Western Australia’s Bayswater City in the Elimination Finals. Has enough talent to replicate fellow South Australian club MetroStars’ remarkable run to winning the whole thing last year providing they can find the consistency to produce their best football.

1. Lewis Moss
Was on the list of AFL club the Gold Coast Suns before turning to football. A phenomenal goalkeeper with great reach who has stood up throughout the season and become a game changer between the posts.

11. Thomas Briscoe
Has the ball on a string and been a potent goal scorer throughout the season, having compiled a tally of 20 goals during the regular season which included two hat tricks. Has the ability to change and win a game off his own boot.

10. Ricardo Da Silva
A silky smooth player with an eye for goal who knows where to run. One of the most experienced midfielders in the competition, his knowledge is invaluable to the younger players in the team.

23. Mitchell Nicholson
Came into the squad this year and his versatility is one of his biggest strengths. Supremely fit, he can run all day and can also shoot from distance if given a sight on goal.

Round 17 – defeated Adelaide City 3-2
Facing a difficult assignment away from home against their old NSL rivals, West Adelaide jumped out of the blocks to lead 2-0 before City erased the deficit to draw level. But it would be Tom Briscoe to the rescue as his 68th minute goal proved the winner.

Round 25 – defeated Croydon Kings 6-1
A game that would see the winner realistically go on to have a crack at the title. Everything just clicked and the team made a serious statement as they hit Croydon for six.

Round 26 – drew 2-2 with Adelaide Comets
The game that saw them finish top of the league. Led 2-0 before Comets drew level with two goals in five minutes to create some nervy moments but top spot was secured as a stoppage time goal from Pirates snatched a 1-1 draw with the other contenders, Adelaide Blue Eagles, to leave West Adelaide one point clear on top. 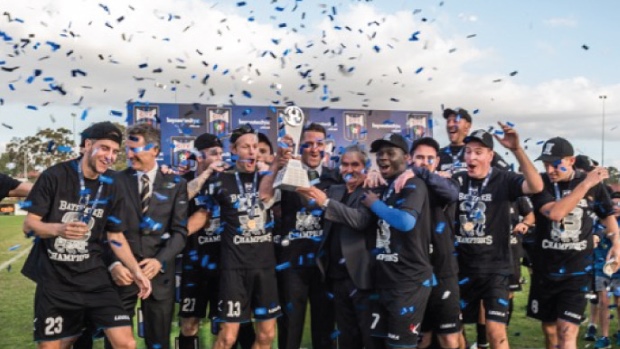 For the second year in a row Bayswater City left the other clubs in their wake in Western Australia’s top division. In a remarkable campaign, they went undefeated winning 19 of their 22 games this season, amassing a goal difference of 43 to deservedly take their place in the PlayStation 4 NPL Finals Series for the second successive year.

Lost at home in a penalty shootout to eventual champions MetroStars last year so will be eager to make amends against West Adelaide SC and secure a place in the Westfield FFA Cup Round of 32 after they had a taste of it in 2014.

13. Trent Kay
A reliable figure at the back who has overcome groin issues to again provide a stabilising influence in a team whose attacking potency is matched by their defensive stinginess. Kay has been Bayswater’s Captain Fantastic this season.

16. Jamie Coyne
The younger brother of coach Chris Coyne gets through mountains of defensive work in a team packed with attacking flair. He will be determined to make amends for last season when his dismissal after just 12 minutes left Bayswater staring down the barrel of defeat in their NPL Finals Series clash against MetroStars. Bayswater eventually lost on penalties.

9. Gustavo Giron Marulanda
A player who can light up the dullest of matches with his pace, skill and finishing. The Colombian striker scored an average of a goal every game in topping the PS4 NPL WA scoring charts with 22 for the season.

21. David Heagney
Giron Marulanda’s partner in goal scoring crime, Heagney bagged 13 of Bayswater’s 64 goals. Capable of scoring the spectacular– as he did with a stunner against Armadale in June – Heagney also has a poacher’s knack and clinical finishing ability.

Round 4 – defeated Perth SC 3-2
A 1-1 draw against Inglewood United in Round 3 had given Bayswater’s rivals some hope that the 2014 champions could be toppled. That hope lasted all of a week as Perth SC were handed defeat on their own patch at Dorrien Gardens. David Heagney scored twice and Bor Bor Sam was also on target in a victory that would’ve looked more impressive but for Harley Orr’s late goal for Perth.

Round 9 – defeated Floreat Athena 3-1
From Round 3, Floreat had trailed league-leading Bayswater only on goal difference and this clash of the top two was seen as Athena’s chance to climb to the summit. Floreat were a goal up at the break but Bayswater nerves were settled during a 16-minute second-half spell in which David Heagney, Danny Dixon and Todd Howarth were all on target. Bayswater went three points clear at the top and were never troubled again.