The PlayStation 4 NPL Finals Series returns to Lakeside Stadium as Tasmania's Olympia FC make the trip north to take on South Melbourne FC. Find out how both clubs qualified here.

One of two clubs to have qualified for their second consecutive tilt in the PlayStation 4 NPL Finals Series, South Melbourne will be highly fancied to progress past Tasmania’s Olympia FC at home.

A superior goal difference saw them see off Bentleigh Greens for first place, Chris Taylor’s team finishing with a flurry as they registered 13 points and scored 19 goals in their final five games. Will be determined to secure another berth in the Westfield FFA Cup Round of 32 after being bundled out by Palm Beach SC in a penalty shootout this year, while they will also be seething after an extra time loss to Bentleigh Greens in last Sunday’s PS4 NPL Victoria Grand Final.

9. Milos Lujic
The robust target man has scored over 50 goals in the last two seasons, claiming the 2015 NPL Victoria Golden Boot. Has developed a reputation of scoring crucial goals, while he also found the back of the net in the club’s heartbreaking Westfield FFA Cup loss to Palm Beach SC.

12. Iqi Jawadi
A hard working midfielder who has been part of the training squad for Afghanistan’s National Team, Jawadi is the club’s reigning Best and Fairest Winner and made his senior NPL Victoria debut at the age of 16. However, he will miss the Elimination Final against Olympia through suspension after being sent off in the PlayStation 4 NPL Victoria Grand Final loss to Bentleigh Greens.

7. Nick Epifano
Scored an impressive 14 goals from midfield this year, including a brace in the tense Westfield FFA Cup qualifier against Melbourne Knights. A superb young talent who can win games off his own boot.

Round 20 – defeated Green Gully 3-2
After successive losses leading in, South Melbourne were staring at more points dropped with scores level going into injury time at home against Green Gully. However, after being kept quiet for much of the day, Milos Lujic bobbed up to make the most of an exquisite through ball from Leigh Minopoulos to snatch all three points.

Round 25 – defeated Avondale Heights 7-0
Another significant result came in the penultimate round when South Melbourne ventured away and put seven goals past Avondale Heights substantially boosting their goal difference and putting them in the box seat.

Round 26 – defeated Northcote City 3-0
This meant it all came down to the final round and with destiny in their own hands knowing a win would be enough, a brace from Milos Lujic helped South Melbourne secure a clinical 3-0 home win against Northcote City to secure top spot. 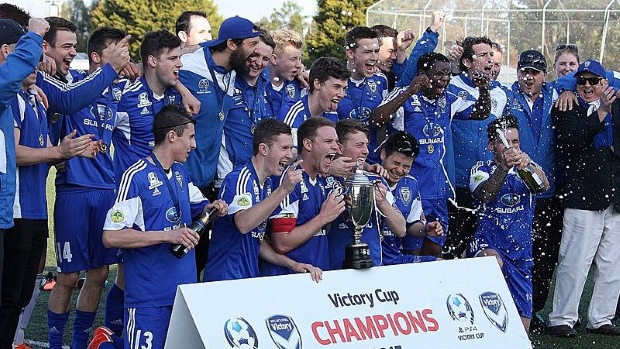 The Warriors proved they were clearly the best club in Tasmania this year as they took all before them to claim the treble – the Summer Cup, the PlayStation 4 Victory League and the Victory Cup, the last which they secured courtesy of a comprehensive 3-1 win over the Hobart JEEP Zebras on Saturday.

Now they will be hoping to keep this winning form going when they head across Bass Strait to tackle South Melbourne FC. It will be a tough task but an opportunity that Head Coach Glen McNeill is buzzing about.

"It has been fantastic... it is an outstanding group of young men that we have here and we've achieved some great things this year," McNeill said.

"We're looking forward to it (the NPL Finals Series). It's going to be a full week, we've got a lot to do, a lot to work on and the players need to be very clear on their specific roles. But we can't wait, it's going to be fantastic."

4. Shae Hickey
Classy and experienced diminutive midfielder who has done it all locally in Tasmania and has been a key cog since crossing to Olympia FC in 2015. An extremely intelligent footballer who plays in front of the defence and is the real lynchpin and an on-field leader. Won the 2015 Walter Pless Media Award for player of the year.

15. Lachlan Nichols
Formally a centre midfielder, Nichols dropped into defence following a season ending injury to club captain Alex Holmes. Reads the play like a book, is strong in a challenge and a sound and smart distributor from defence.

10. Gavin Hoy
The Canadian is an attacking midfielder/winger with a good burst of pace. He is a strong finisher, good at navigating traffic and has outstanding vision and passing ability.

1. Sean Lewis
Olympia FC’s gloveman, the American is a strong custodian, capable of pulling out the top draw save and rarely lets in a howler. However, it’s his distribution that is the real asset, rarely misses targets out from the back.

5. Luke Eyles
The winger/full back has already signed for South Melbourne for 2016-2017. Burst onto the Tasmanian NPL scene in 2015 with an outstanding first season at Olympia, collecting the league's Rising Star Award. Scored 14 goals in 20 games but also displayed strong defensive skills. Often had a match winning influence.

Round 3 – defeated South Hobart 3-1
The season had twists and turns with one of the most significant results coming on Good Friday against fellow contenders South Hobart.

Round 9 – defeated Hobart Zebras 1-0
Another crucial result against one of the clubs pushing for the title.

Round 12 – defeated Glenorchy Knights 14-0
Set a league record for biggest win and most goals from one team in a match as they ran rampant at Warrior Park. They followed this up with an impressive 9-0 drubbing of Launceston City the next weekend.

Round 21 – defeated Devonport 4-0
Sealed their spot at the top of the league on the final day of the competition as they finished two points clear of reigning champions South Hobart. Ultimately, they only lost three games all season so in reality it was beating the teams they should beat that won them the title.