Get the lowdown on Moreton Bay United FC and Edgeworth FC ahead of their PlayStation 4 NPL 2015 Elimination Final on Saturday.

A club that has put an emphasis on players’ technical ability and employs a philosophy of player development where winning becomes a by-product, the Jets proved it is working as they edged out Brisbane Strikers to finish top of the pile in Queensland and then go on to win the Grand Final.

With a young and ambitious coach at the helm, Moreton Bay United averaged better than two goals per game during the season and despite only being established in 2012, showed they can match it with the other big boys in the PlayStation 4 NPL Queensland competition.

They are sure to be buoyed playing against Edgeworth FC in front of a home crowd, even more so with it being played as the main game following a curtain raiser between the NPL Queensland U23 All Stars and Hyundai A-League outfit Brisbane Roar. Only concern will be if they can come back from cloud nine in time after their thrilling Grand Final win over Brisbane Strikers.

17. Jackson Hall
Recruited from Brisbane Strikers in the off-season. A dynamic pocket rocket who plays in behind the striker. Offers plenty of cutting runs that will either tee him up for a goal scoring opportunity or serve as a decoy to create space for his team mates.

11. Charles Mendy
A dynamic, lanky Frenchman who is generally involved in all of Moreton Bay’s attacking forays. Has scored 31 goals in 46 games so leave him unmarked at your peril.

1. Luke Borean
The Jets’ goalkeeper is an unsung hero of the team. Is good for at least one match defining save per game. Has sharp reflexes and is confident in traffic to catch balls from crosses. Has recorded five clean sheets this year.

4. Alex Henderson
A young defender making his mark with the Jets. Is a threat from set-pieces with his head, has a big engine, a big frame, and is now readying himself to see if he’s a big game player.

Round 3 – defeated Sunshine Coast FC 7-0
Made the league stand up and take notice early in the season. Instilled a belief amongst the squad in coach Adam Piddick’s game plan.

Round 10 – defeated Palm Beach SC 4-1
Recorded a big come from behind win over the defending premiers.

Round 6 (1-1) and Round 17 (2-2) against Brisbane Strikers
Battled hard on both occasions for a point against their biggest premiership rival. Had they lost either of these matches, chances are they would not be featuring in the PlayStation 4 NPL Finals series. 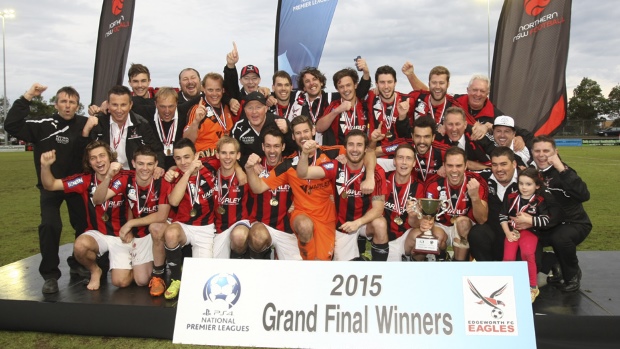 The Eagles will be attempting to become the first PS4 NPL Northern NSW club to progress past the Elimination Finals when they venture to QSAC to take on Queensland’s Moreton Bay United.

Edgeworth FC head into the Finals Series full of confidence after claiming the PS4 NPL Northern NSW title against Hamilton Olympic and will have had a fortnight to since their celebrations began to prepare for their assignment against the Jets. Edgeworth also reached the Westfield FFA Cup Round of 32 before more than holding their own against Melbourne City FC, only succumbing in stoppage time to a stunning Aaron Mooy free kick.

11. Dylan Holz
Hailed by coach Damien Zane as the side’s best player in the last third of the competition and the finals, the youngster is fast and dangerous in the front third. Has only scored 4 goals this year, however is involved in most of the Eagles’ goals whether through assists or build up play. A cracking individual goal against Broadmeadow where he turned and volleyed into the bottom right hand corner indicated he can perform in the big games.

8. Josh Evans
Evans is Edgeworth’s rock at the back. Has been played a huge part in Edgeworth’s 2015 success, in both the league and the Westfield FFA Cup. Can also play a part in the front third as he is extremely dangerous in the air, and has two goals to his name in 2015, both from set pieces.

6. Luke Walker
The captain who leads by example. Missed the first half of the season with a knee injury he sustained in a trial match. Two weeks after his return to the pitch the team moved to first place and stayed there for the final seven rounds, which is no coincidence. Damien Zane has hailed his leadership skills and suggested he is a huge benefit for the younger guys in the squad. Was the recipient of the Dave Williams Medal which is awarded to the Player of the Match in the PS4 NPL Northern NSW Grand Final.

Round 12 – defeated Hamilton Olympic 3-1
Ayden Brice and Brody Taylor scored in the first half before Hamilton Olympic hit back straight after the break to make it 2-1. With 15 to go Brice headed in his second of the game inflict Hamilton’s first loss of the season. In the process Edgeworth leap frogged their opponents into first on the table, a position they would not surrender for the remainder of the season.

Round 18 – defeated Weston Workers 3-1
The Eagles began the final round in first spot, however Lambton’s win a day earlier had temporarily sent them to the top of the pile meaning Edgeworth needed victory to finish as Premiers. They went ahead through an own goal but just before half time Weston struck at into the right net to make it 1-1 at half time. But from then on it was all Edgeworth, goals to Dylan Holz and Bren Hammel sealing the Premiership.