Blacktown City FC and Canberra FC both have a point to prove when they meet in a PlayStation 4 NPL Elimination Final on Sunday. Get the lowdown on both clubs here.

After finishing five points clear of their nearest rivals and with the stingiest defence in the league in a season where they only tasted defeat twice in 22 games, Blacktown City FC have reason to believe they can follow Sydney United 58 FC as the second club from NSW to win the PlayStation 4 NPL Finals Series.

A squad littered with players who have Hyundai A-League experience, coach Mark Crittenden will be reinforcing that there is no repeat of their surprise home defeat to MetroStars in the Westfield FFA Cup Round of 32, while they will also have extra determination to win after being beaten in last weekend’s PS4 NPL NSW Men’s 1 Grand Final.

19. Zach Cairncross
Returned from his latest stint in the Hyundai A-League as one of the best central defenders in the NSW NPL. His calmness in all defensive situations combined with his ability to play the short or long pass makes him a standout in the competition, and at an imposing 6 foot 4 inches, his aerial presence makes him the complete package. But unfortunately he will miss the match cut throat encounter against Canberra FC after being red carded in last weekend’s PlayStation 4 NPL NSW Men’s 1 Grand Final.

9. Joseph Gibbs
Joey was a central figure in the balance of the side and contributed an outstanding 16 League goals in 17 games. A constant threat in the box, his workrate and understanding of how to create space place him in an elite group of strikers. His defensive efforts are often underestimated by the the casual observer, but not by his team mates, who all acknowledge that he gives Blacktown the ability to defend from the front.

8. Sasa Macura
Sasa combines the rare attributes of an shouldering an enormous workload in the middle of the park with some sublime touches in attack. His 5 goals from defensive midfield unlocked some very tight matches, and his ability to get the Blacktown attack rolling was instumental in the rhythm of the side. Never one to shirk the tough work, Sasa also screened the back 4 superbly.

Round 5 – defeated APIA Leichhardt 3-1
The first meeting of two competition heavyweights came in Round 5. In a real "top of the table clash" Blacktown were able to take their game to a new level with some outstanding attacking football.

Round 12 – defeated Sydney United 58 FC 6-1
A tough road trip to Sydney United in Round 12 kicked off the second half of the year, and it turned out to be a real show of attacking intent. Goals from right across the park gave the squad confidence they could perform well away from home.

Round 21 – defeated Blacktown Spartans 4-0
The away leg of the Blacktown Derby gave the side a chance to all but wrap up the Premiership in Round 21. After a difficult loss to Sydney Olympic the week before, Blacktown City side put in a resounding display of attacking football against a motivated Spartans outfit. The result kick started a run that saw them score 16 goals in the next four matches. 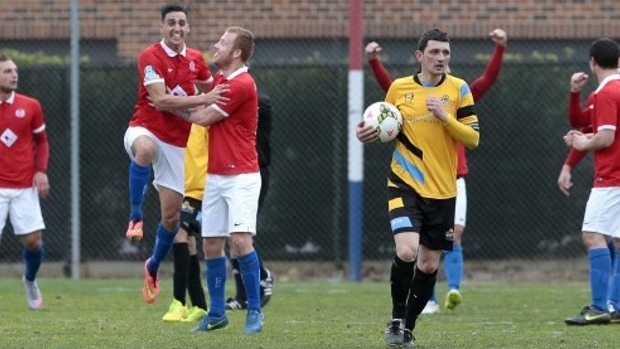 Canberra FC will make their second appearance in the PlayStation 4 NPL Finals Series after featuring in the inaugural edition in 2013 when they went out at the Elimination stage after a narrow loss to Sydney United 58 FC. With a rich and decorated history in the nation’s capital, FC will have their work cut out against Blacktown City FC but at the same time know that on their day, there is enough talent and attacking potency to match it with the best in the country.

Clinched top spot and their place in the NPL Finals Series courtesy of a 3-2 win over their challenges for the top billing, Tigers FC, but could not secure the Premiership/Championship double after falling to Canberra Olympic in the season decider.

9. Thomas James
Gifted and exciting attacker who joined the club from Monaro Panthers this season, the Englishman is the leading scorer with 18 league goals to his name. Speedy and with an eye for goal, James is a potential match-winner.

1. Sam Brown
Young goalkeeper who joined Canberra FC mid-season from Woden-Weston FC. Good in the air and comfortable in possession when the ball is at his feet. An athletic, agile custodian.

20. James Field
Influential midfielder is part of a trio of players that form the heartbeat of the Canberra FC engine room. Signed from local rivals Canberra Olympic, Field offers a wide range of passing and has the ability to strike a mean dead ball with ferocious free-kicks from range.

Round 12 – defeated Tigers FC 3-2
In a thrilling finale, the last round of the season (a catch up Round 12 fixture) ended up being a Premiership decider between the top two teams. Tigers FC needed a draw or a win to clinch top spot while only three points was enough for Canberra FC. Thomas James scored twice and Domenic Giampaolo scored the other goal to put Canberra FC into the PlayStation 4 NPL Finals Series for the second time.